Ewa Scheer, based out of Montreal, is an artist of unique vision.  In her ice project, Scheer applies non-toxic pigments on natural ice formed in the forest; her paintings exist for as little as two seconds and as long as two weeks.  The work is then photographed, set behind thick plexiglass which mirrors ice, allowing her to preserve these transient images and capture the moment of interaction between creator and Creation.

Originally from Poland, Ewa Scheer currently resides in Montreal. Scheer earned Bachelor of Applied Arts from Ryerson Polytechnic Institute in Toronto in 1992 and her Masters of Fine Arts from the University of Regina in 1998. Her oeuvre includes pencil drawings, drawings with fragments of photography or hybrid drawing, mixed-medium, paintings, photography, and conceptual works of ephemeral art, what she calls meteo-graphs or ice-paintings. Scheer’s work has been exhibited in Canada, the United States and Europe and she was recently a selected finalist for the Kingston Prize at the 2019 Canada National Portrait Competition. 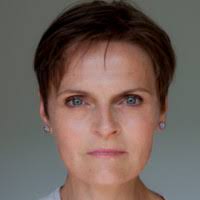 The art I need is one which inspires us to live and think, the one which helps us to face our own mortality. Art reveals pain and beauty, it makes us aware. Like REM sleep it processes all. Artists are conduits. Art is everywhere; I find it by applying non-toxic pigments on ice formed on ponds and in the forest. The ice-paintings come from a need to connect with you. The paintings exist for as little as two seconds and for as long as two weeks. Their life span depends solely on the temperature of the environment. We project on to the image, which reflects our human culture and our human concerns. The ice-paintings suggest bursting stars, the universe and the shapes which build our world. These are archetypal stories shared by our common sub-conscious, conveying our relationship with nature and culture, and our responsibility to care for and nurture both. 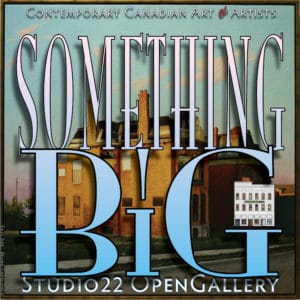 September 26, 2018
We like to play our music loud during Art After Dark. It’s loose. It’s fun. Visitors should expect to enjoy groovin’ to the tunes while taking in our contemporary Canadian art and artists. 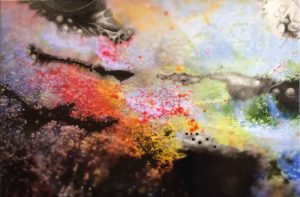 June 9, 2016
“I don’t believe there is such a thing as meaningless art,” said Ewa Scheer, standing amidst her artwork entitled Vibrant Disappearance at Studio 22. 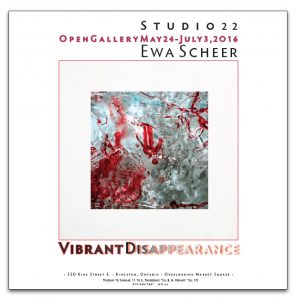